The 1000 series is the entree to the beastmaker range. It has been as ergonomically designed as possible to allow the hands of people relatively new to training to get used to the shock of the new. Whether you're climbing font 6a or 7c (one-arm deadhangs anyone) this is a great fingerboard.

The 1000 series does not have the monos and other nasties of the 2000, replaced by some halleluja jugs as well as greater 3 finger and 2 finger pocket depths.

This is the fingerboard for you if you're new to fingerboard training and want to get serious. It's also a fantastic compliment to the 2000 series giving you more depths and range of holds. 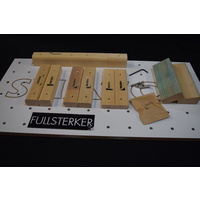